What Is a Sputtering Equipment? 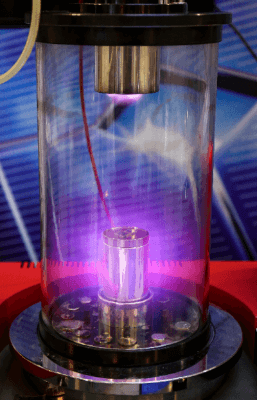 Sputtering equipment is used to create a very thin film uniformly on the surface of an object. It is mainly used for semiconductor and liquid crystal deposition and is one of the physical vapor deposition (PVD) methods, the same as vacuum evaporation and ion plating.

The advantage of deposition by sputtering equipment is that it can achieve a uniform film thickness with high precision, and because it uses electrical action, the film can be fabricated in a durable manner.

It is similar to the evaporation equipment often used for film deposition, but its superiority lies in its ability to produce films of metals and alloys with high melting points.

Sputtering equipment is also used to clean the surface of an object.

Recently, metal is deposited on the surface of plastic, glass, and film to make them conductive and used as transparent electrodes and wiring for touch panels, further expanding the range of applications for sputtering equipments.

In addition, medical devices and miscellaneous goods with antibacterial effects by coating the surface with titanium dioxide, which has photocatalytic properties, are also available.

The principle of sputtering equipments are that a high voltage is applied under a vacuum to repel atoms of the film material to form a film on the surface of the object.

First, under vacuum conditions, low-reactive atoms and molecules such as argon and nitrogen flow into the equipment at a constant pressure.

A high negative voltage is applied to the target, which is the material for the thin film, and argon or nitrogen ionized in the equipment in advance is irradiated onto the target. The ejected target atoms are deposited on the surface of the target to which a positive voltage is applied to fabricate a thin film. Since the electrical properties of the ions are used, the strength of the film can be increased. In some cases, oxygen is added instead of argon or nitrogen to deposit oxide films.

Although sputtering equipments are capable of homogeneous deposition, the time required for deposition is longer compared to other PVD methods. Therefore, a method has been developed to deposit atoms even more powerfully by applying magnetic force by placing powerful magnets on the target side and the object side.