This section provides overview, applications, and principles of encoders. Also, please take a look at the list of 24 encoder manufacturers and their company rankings.

What Is an Encoder? 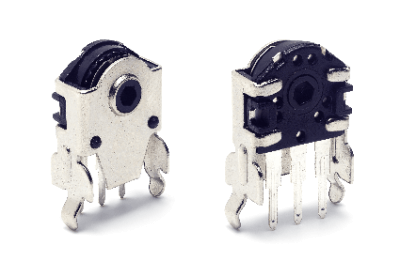 An encoder is a device that converts changes in position into electrical signals and outputs them.

Encoders are mainly used in machines that use motors, among which stepping motors and servo motors are typical motors that use encoders.

Stepping motors are motors whose rotational speed and angle can be accurately controlled by pulse signals.

The interval between pulses and the number of pulse signals applied to the motor determine the angle and speed of rotation, enabling accurate positioning, which is why stepping motors are used in manufacturing and other fields.

The open-loop method is a simpler system than the closed-loop method, but it always applies the maximum current to prevent "stalling," which is the inability to keep up with the pulse speed.

A servo motor is a motor that has a mechanism to maintain a constant speed of continuous linear or rotational motion by precisely controlling the distance traveled and angle of rotation in a single control.

It is a three-piece set consisting of encoders, a brushless AC motor (the mainstream) or a DC motor, and a servo amplifier. AC motors are currently the most common type of motor used in machines that require precise motion control. Examples include industrial robots, automobiles, elevators, and automatic guided vehicles. They are used in many factories, especially now that factories are becoming more and more automated.

When selecting encoders, consider measurement accuracy, resolution, reaction time, size and shape, durability against vibration and shock, and protection against the operating environment.

Encoders are classified into optical, magnetic, and electromagnetic induction types according to the detection method.

Displacement can be measured by shining light on a rotating disk with evenly spaced holes attached to a rotating shaft and detecting the period of light passing through the holes. Since light has little effect on machines, it is widely used in general.

Optical encoders can be classified into two types according to the output signal: incremental and absolute. Each method is explained below.

Displacement is measured by utilizing the magnetic field of a magnet attached to the rotating shaft, which fluctuates due to rotation.

Displacement is measured by detecting electromagnetic induction generated by a coil mounted around a rotating shaft.