This section provides overview, applications, and principles of ac motors. Also, please take a look at the list of 56 ac motor manufacturers and their company rankings.

What Is an AC Motor? 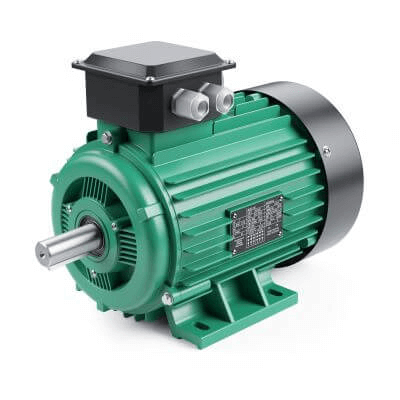 An AC motor is an electric motor that is driven by an AC power source.

AC motors are largely composed of a stator and a rotor.

AC motors are used to rotate equipment such as pumps and in factories, conveyors, rollers, and fans. They are used by connecting the equipment (rollers, etc.) to be rotated, and the shaft of the rotor with a device called a coupling.

Compared to DC motors, which are driven by a DC power source, AC motors are widely used because they are easier to maintain and do not have brushes, which are consumable devices.

In recent years, AC motors has become more widely used because they allow speed control, which was once considered easier with DC motors.

AC motors are mainly classified as shown in Figure 2.

They are broadly divided into synchronous motors and induction motors, but can also be classified according to the type of AC power source.

AC motors can also be driven from DC power sources. In this case, an inverter that converts DC to 3-phase AC is used together.

A synchronous motor is a motor in which there is no slippage (synchronization) between the rotating magnetic field and the rotor, and whose rotational speed is determined by the number of poles in the motor and the frequency of the power supply.

Synchronous motors are classified into various types according to the construction of the rotor, but here we will discuss the permanent magnet type, which is relatively commonly used.

Figure 3 shows the rotor structure of an induction motor. As shown in the figure, induction motors are generally composed of aluminum or other conductors in a cage shape.

The rotating magnetic field from the AC power source generates an induced current in the cage-shaped conductor based on the principle of electromagnetic induction, and Fleming's law states that a force is generated by the action of the current and magnetic field. This force causes the AC motors to rotate and move the machine connected to the output shaft.