This section provides overview, applications, and principles of induction motors. Also, please take a look at the list of 4 induction motor manufacturers and their company rankings.

What Is an Induction Motor? 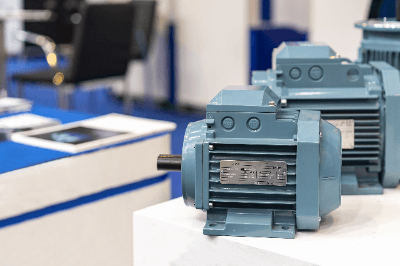 Induction motor is motors that operate on alternating current and are powered by the force generated by electromagnetic induction.

Therefore, they are also called AC motors with "AC" meaning alternating current. Induction motor is one of the oldest motors, with a simple structure and do not require any special power conversion, and operate simply by connecting to an AC power source.

As a result, they combine high reliability and long life, and are still widely used today. Another advantage is that they do not use magnets that contain rare metals, so they provide highly efficient rotation at low cost.

Induction motors are used in a wide range of applications, from home appliances such as washing machines and fans to large-scale production equipment for factory facilities, because of their characteristic of higher efficiency with larger capacity.

Induction motors are broadly classified into two types, three-phase motors and single-phase motors, according to the difference in AC current.

Induction motors are composed of a "stator" and a "rotor". The stator has coil windings that conduct three-phase alternating current, and the rotor has cage-shaped wiring that conducts current due to electromagnetic induction from the rotating magnetic field.

The ratio of the rotating magnetic field speeds of the rotor and stator at this time is called the "slip" and is one of the major factors that determine the torque characteristics of induction motors.

To rotate a motor with single-phase AC, it is necessary to generate a rotating magnetic field. Therefore, a capacitor is incorporated in the auxiliary winding of the motor to generate a rotating magnetic field by connecting the main winding directly to the power supply and the auxiliary winding to the power supply via a capacitor.

Other Information About Induction Motors

The rated rotational speed of induction motors are derived by the following equation.

In addition, induction motors have slippage, which means that the rotation speed decreases little by little in accordance with the load torque, and the actual rotation speed is given by

Use of Pole-Change Motors Pole change is a motor in which the number of poles can be determined by the method of wiring. The disadvantage is that the motor itself becomes larger and less versatile. Also, the rotation speed can only be changed in steps according to the number of poles.

Resistance Control of Wire-Wound Motors Speed control is possible with wire-wound induction motors. The principle is a motor with coil windings instead of cage wiring for the rotor, and by passing a current through a resistor through the windings (secondary windings), slip is increased and the speed can be slowed down further from the rated value. However, there is a disadvantage in that a resistor is required.

In addition, a separate slip ring is required to pass current through the rotating rotor winding, which increases the number of parts and maintenance costs. Energy loss is also significant because of the heat generated from the resistance.

Rotation Speed Control by Fluid Coupling Smooth acceleration at startup can be achieved by using a fluid coupling, which connects the drive and driven shafts via hydraulic pressure.

Inverter Speed Control of Induction Motors Currently, induction motors generally use inverters for speed control. Three-phase AC power with fixed voltage and frequency is controlled by switching a three-phase bridge using power devices such as IGBTs to vary the rotation speed of the motor. By varying the voltage along with the frequency, the motor can be driven with a constant torque.

Energy loss is also extremely low, at only a few percent of the drive energy, thanks to improvements in semiconductor and control technologies, and is most widely used to control the rotational speed of induction motors at a time when the SDGs are being actively called for.