This section provides overview, applications, and principles of pressure sensors. Also, please take a look at the list of 82 pressure sensor manufacturers and their company rankings.

What Is a Pressure Sensor? 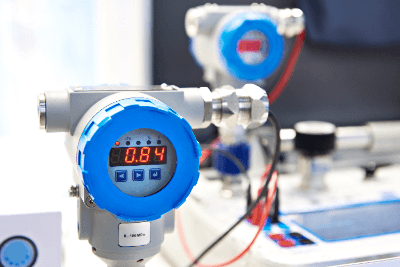 A pressure sensor is a device that measures the pressure of a gas or liquid. The measuring section converts change caused by pressure into an electrical signal and output the pressure. The typical measuring part is a gauge type.

Semiconductor gauges, strain gauges, and thin metal films are used for gauge-type pressure sensors. Some types can be set to atmospheric pressure, absolute pressure, or an arbitrary standard for the pressure at the time of measurement.

Pressure sensors are used in many industrial processes to measure pressure in piping and equipment.

It is necessary to select an appropriate pressure sensor in consideration of the pressure range, the type of gas or liquid to be used, the temperature at which it will be used, and its durability. Pressure sensors are used in a variety of applications, as shown below.

The metal thin-film type pressure sensors measure pressure by forming a metal thin-film on a diaphragm and measuring the change in electrical resistance of the deformed metal thin-film due to pressure. They are highly sensitive to strain gauge type and can be used under high temperatures.

4. Pressure Sensors Other Than Gauge Types

The capacitance type detects the capacitance between a fixed electrode and a diaphragm electrode. The amount of displacement of the diaphragm, which deforms in response to changes in pressure, is measured as a change in capacitance and converted to pressure. It is suitable for measuring the pressure of multiple gas types or gas mixtures.

In the optical fiber type, when pressure is applied to the diaphragm, the diffraction grating at the tip of the optical fiber is deformed, and the change in wavelength of the reflected light is measured. It can measure high temperatures and high precision and is used to measure the pressure of molten resin and blood pressure inside the body.

In the vibration type, a transducer is installed in a silicon diaphragm chip, and when the diaphragm is deformed by pressure, the natural frequency of the transducer changes. The change in frequency is detected and converted to pressure. It has features such as high accuracy, high sensitivity, and high resolution.

In addition, by installing pressure sensors mats in rooms of facilities or at the entrance of homes, it is possible to know when a person with dementia is about to leave.

Automotive pressure sensors are required to operate reliably and accurately over the long term in operating temperatures ranging from -30°C to 150°C, and even exceeding 300°C depending on the location of use. In addition, since diesel engines must compress a mixture of fuel and air at very high pressures, pressure sensors must have the ability to accurately measure pressures as high as 200 MPa.