What Is an Acceleration Sensor? 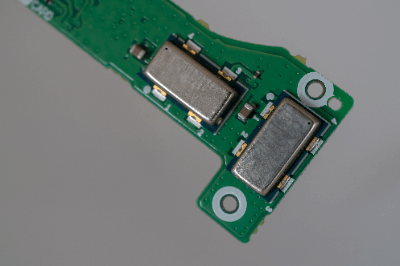 Acceleration is the increase in velocity per unit of time. In physics, acceleration is an important parameter that can exert a force on an object.

Acceleration sensors are broadly classified into capacitance method, piezoelectric (piezoresistive) method, and thermal sensing method. The basic principle of each method is the same: the sensor is divided into a fix part and a flexible part. When acceleration is applied to the accelerometer, the flexible part deforms.

Since the capacitance between the electrodes of the fix part and the flexible part changes when acceleration is applied, the acceleration can be determined from the amount of change. Figure 1 shows an example of a pedometer that detects gravitational acceleration using a 3-axis acceleration sensors.

At the same time, by applying a bandpass filter to data (a), data (c) is obtained by removing the low-frequency gravity acceleration component and the high-frequency noise component. Data (b) and (c) are time-series data in the three axes (x, y, z), respectively, and if the orientation of the sensor changes during walking (measurement), the values detected in each axis will also change.

Here, by taking the inner product of the data (b) and (c) (i.e., inner product of 3D vectors) at each time, it is possible to obtain time series data of the gravity direction component (one axis) of the body center of gravity acceleration, as shown in data (d).

In this way, the gravity direction component of the pedestrian's acceleration can be obtained, regardless of the orientation of the sensor, in positive projection to the gravity acceleration, i.e., the vector quantity is converted to a scalar quantity, and based on this data (d), the walking pitch and number of steps can be calculated.

Other Information on Acceleration Sensors

1. Difference Between Acceleration Sensors and Gyroscopes

One sensor that has a similar performance to acceleration sensors are gyro sensor. Here, we will explain the difference between accelerometers and gyro sensors.

As the name suggests, acceleration sensors are used to measure acceleration. Gyro-sensors, on the other hand, are designed to measure angular velocity. Which means that the physical quantities they detect are different.

Gyro-sensors use the Coriolis force to detect the orientation and posture of an object, which is then output as an electrical signal. They are used when measuring the tilt of an object and are installed in a wide variety of electronic devices such as car navigation systems, digital cameras with image stabilization, smartphones, and game consoles.

Combining acceleration sensors with a gyro sensor can also be used to measure the motion of an object in more detail. For example, a car navigation system, one of the most popular in-vehicle products, uses a combined sensor technology.

The gyro sensor can determine the direction of the car, and the acceleration sensors can determine the distance traveled, making it possible to accurately display the current location even in places where radio waves are difficult to reach, such as in tunnels.

2. How to Use Acceleration Sensors

Once the appropriate acceleration sensors for the measurement target is determined, the sensor is actually wired, and the measurement program is created. At this point, the "parameter setting" is important. In the parameter settings, you can change the sensitivity of the sensor, the 0g (zero gravity acceleration) output level, and so on. If these are not set appropriately, it will be difficult to realize the desired application.