This section provides overview, applications, and principles of vibration sensors. Also, please take a look at the list of 24 vibration sensor manufacturers and their company rankings.

What Is a Vibration Sensor? 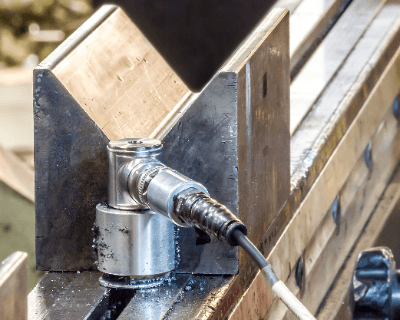 Vibration sensors are sensing elements used to measure the vibration state of machines and objects.

This is a sensor that uses the Doppler effect. A laser Doppler sensor detects velocity by irradiating a laser beam from the sensor onto a vibrating object and converting the frequency change of the laser beam reflected from the vibrating object, i.e., the velocity change, into a voltage.

According to JIS, the detection element of mechanical vibration is the change in the magnitude of a quantity representing the motion or displacement of a mechanical system over time. In many cases, the vibration alternates between a state greater than and less than the average or reference value, and in general, this vibration is composed of three elements: amplitude, frequency, and phase.

In particular, a vibration that repeats at regular intervals is called harmonic vibration and consists of a single frequency. In such cases, displacement, velocity, and acceleration are as follows. By differentiating the displacement, the velocity can be derived, and by differentiating the velocity, the acceleration can be derived.

The sensor should be firmly fixed with stud bolts or other means so that it adheres closely to the non-measured object. If the sensor is not firmly attached, it may show filter characteristics with peculiar attenuation characteristics in the frequency response, etc., making accurate measurement impossible. Note that other methods of securing the sensor include the use of adhesives or magnets.

Frequency analysis is widely used to analyze data detected from vibration sensors. Frequency analysis is a method of examining the frequency components and intensity of the measured waveform. The analysis provides an indicator that can be used to determine if the vibration of an object is under normal operating conditions.