This section provides overview, applications, and principles of tilt sensors. Also, please take a look at the list of 32 tilt sensor manufacturers and their company rankings.

What Is a Tilt Sensor? 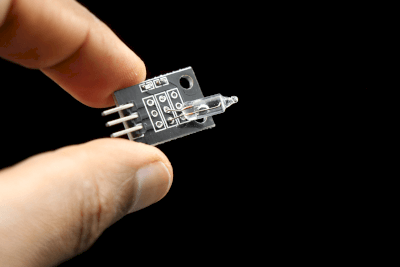 A tilt sensor is a device that detects the inclination of an object. It measures the tilt of an object from a horizontal position with respect to gravity and displays the tilt, angle, or slope of the object.

Tilt sensors are also called angle sensors. Strictly speaking, a tilt sensor is only the part that detects inclination; there are other types, such as inclinometers, to which electronic devices that adjust input and output are added.

Tilt sensors are used for purposes ranging from tilt detection to attitude control. Tilt sensors can be classified into two main types. The following are examples of tilt sensor applications.

This section describes the principle of tilt sensors. An incline sensor is a device that generates an electrical output that varies with each movement. Depending on the number of axes of inclination to be detected, single, dual, or triaxial tilt sensors are used. Past switch forms have evolved and are now mostly combined with sensing technology. There are several types of tilt sensors. There are electrolytic liquid types, MEMS types, and other types that have been used since the early days of tilt sensors, but the MEMS type is mainly used in terms of accuracy and response time.

The electrolyte type uses the property of a liquid surface to become horizontal and detects the inclination of the liquid as the amount of change in capacitance. The electrolyte (conductive liquid) is sealed in a cavity inside the instrument. By applying a voltage between the electrodes, an electric field (dispersion field) is formed. When the device is tilted, the liquid flows, the electric field changes, and the internal resistance of the circuit changes, which is measured and converted into an angle. The disadvantage is that the response time is relatively slow, and the liquid level is easily affected by vibration.

The MEMS type utilizes micro-electro-mechanical systems technology. The inclination is indicated by the electrical output generated by the deflection of the part due to gravity. Two pairs of fixed and movable electrodes are arranged. Using the positional relationship between the electrodes when horizontal as a reference, the capacitance between the electrodes also changes as the positional relationship changes due to inclination, and this change is measured and converted into an angle. If the application or object to be measured is dynamic, the effect of acceleration must also be taken into consideration. MEMS-type tilt sensors have a mechanism to attenuate vibration and shock with a low-pass filter to suppress errors.

The quartz crystal type is a high-sensitivity tilt sensor that utilizes the characteristics of a quartz crystal. A cantilever made of processed quartz crystal and a holding part is fixed, and electrodes are formed at both ends of the cantilever and the holding part. These electrodes act as capacitors, and as the cantilever deflects due to tilt or vibration, the distance between the electrode plates changes. This also changes the capacitance, which is measured as a change in frequency. The conversion from capacitance to frequency is realized by combining the tilt sensor with a crystal oscillator and a transmitter circuit.

About Sensors for Detecting Tilt

A tilt sensor is a sensor that detects the tilt of an object. In addition to tilt sensors, there are other sensors that can measure tilt angles, such as acceleration sensors.

A tilt sensor is one in which the sensor output itself is output with information on the tilt angle. Because of its low-frequency fluctuation, it is effective for measuring the angle of inclination in slow motion or in a stationary state. Acceleration sensors detect acceleration applied to an object. Therefore, it can detect not only the direction of gravity but also forward/backward and left/right movements. Compared to tilt sensors, acceleration sensors have a wider frequency bandwidth and can measure faster movements.

Tilt sensors are used to prevent cranes and construction vehicles from tipping over, for example, because of their ability to detect tilting. Acceleration sensors are used, for example, in applications that change the vertical and horizontal display of a smartphone to match the environment in which it is used.