This section provides overview, applications, and principles of force gauges. Also, please take a look at the list of 5 force gauge manufacturers and their company rankings.

What Is a Force Gauge? 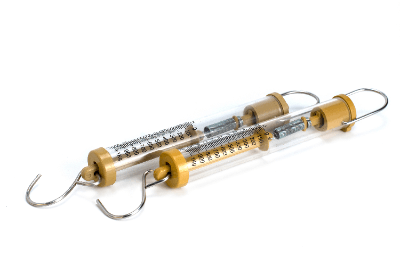 A force gauge is a device to measure the load or tension acting on an object to be measured.

A digital force gauge can be held in a hand and pulled or pushed against an object to be measured, or it can be mounted on a stand for a force gauge to take a measurement.

They are used to assure the quality of products and to investigate the physical properties of objects to be measured.

Depending on the intended use, the rated capacity, the corresponding physical quantity, and the durability period should be considered when selecting force gauges.

Here are some examples of force gauges applications:

The principles of operation of force gauges are explained below.
The explanation is divided into three types: analog type, digital type, and when a stand is used.

Analog type force gauges consists of a spring for measurement, and a rack for hooking to an object to be measured or a tool for pushing against it. The force acting on the measuring object is measured by the displacement of the spring and output by the meter. It is characterized by the fact that it does not require a power supply.

Digital force gauges consists of a load cell for measurement and a tool to attach to the measuring object. Force is detected by measuring the change in electrical resistance of the load cell displaced by the force of the measurement target. Some models are characterized by the ability to save data to a PC.

3. Force Gauges When Using a Stand

By using a stand to which force gauges can be attached, accurate elasticity and stress at break can be measured. Some models of stands are capable of a reciprocating test, and fatigue strength can also be measured.