What Is an X-Ray Diffractometer? 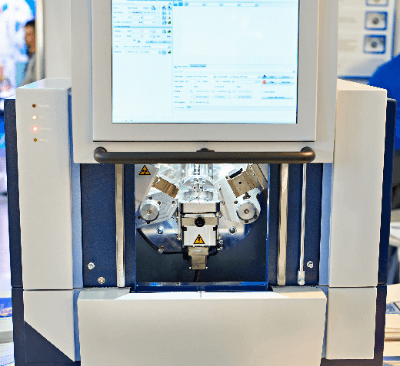 X-ray diffractometers are often used to measure materials with crystalline properties, such as single crystals, powders, and thin films. They are utilized in the research and development and analysis of various materials, including organic materials, inorganic materials, alloys, and proteins.

X-ray diffractometers are used to measure the diffraction phenomenon that occurs when a sample is irradiated with X-rays. By analyzing the diffraction patterns obtained, it is possible to evaluate the crystallinity, orientation, and lattice defects of the sample.

X-rays irradiated on a material are scattered by electrons in the material. In the case of crystals and other materials in which atoms are arranged with some degree of regularity, the scattered X-rays interfere with each other, amplifying or attenuating each other, and the scattering intensity increases only in a certain direction. This is called X-ray diffraction.

In X-ray diffraction, it is known that the X-ray scattering intensity increases when the Bragg equation 2d sinθ = nλ (d: lattice spacing θ: Bragg angle n: integer λ: wavelength of the irradiated X-ray) holds. In other words, if the wavelength λ is fixed, the lattice plane spacing d can be determined for various diffraction angles 2θ (angle between incident and diffracted X-rays). In this way, the atomic arrangement of the measured material is clarified from the measured diffraction pattern.

PXRD is a method of measurement by moving the angle of incidence of irradiated X-rays and the position of the detector, etc. The diffraction intensity for a diffraction angle of 2θ is obtained as data. It is mainly used for identification and qualitative analysis of substances with known diffraction patterns. It is the most commonly used measurement method because it requires only a small sample and is easy to adjust the sample.

This is a method of measurement in which the incident angle of the irradiated X-rays is fixed so that it is almost parallel to the substrate surface, and the detector is moved. In-plane measurement can also be performed by moving the detector in a direction parallel to the substrate surface. Since the influence of the substrate is relatively small and information on the area close to the surface can be obtained, this method is mainly used to identify the crystal structure of thin films and interfaces and for qualitative analysis.

Since each has different characteristics, it is necessary to select the one best suited for the purpose of use and the sample to be measured. Depending on the purpose of use, it may be better to use an X-ray scattering system, which is a similar measurement system. Other accessory devices can be used to change the type of light source and to change the measurement environment, such as temperature and pressure, while performing measurements.