This section provides overview, applications, and principles of terminal blocks. Also, please take a look at the list of 89 terminal block manufacturers and their company rankings.

What Is a Terminal Block? 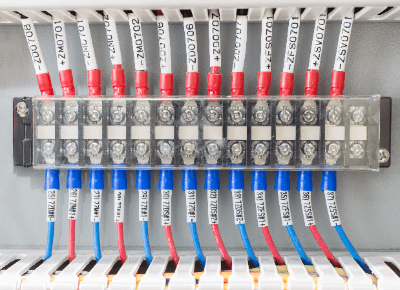 Electric wires are treated with crimp terminals and fixed to the terminal block. Screw-fastening and screwless types are available for terminal block.

Two-stage types and oil-and chemical-resistant types are also available. Voltage and continuity can be measured on the terminal block using a tester.

Terminal blocks are divided into conductive boards and components such as plastic girders.

Conductive boards are made of conductive materials and are used to conduct electric current between wires. The plastic frame is the part that insulates the electric circuit to prevent ground faults.

Crimp terminals are used to connect the conductive plate to the wires. Although crimp terminals alone may be used, it is safer to protect them from electric shock with marked tubes or insulating caps.

Do not allow wires to ride on top of equipment or fixtures to avoid electric shock or ground fault. Before use, check the specifications of the terminal blocks to ensure that the current and voltage are within the allowed range.

Screwless types are convenient because they do not require terminals and can be used by stripping the wires and inserting them directly into the terminal blocks.

Resin mounts are available in thermoplastic and thermosetting resins, which differ in heat and chemical resistance. Screws and conductive plates are made of copper, stainless steel, chrome plating, or other conductive metals, and many products are RoHS compliant.

Apart from the classification of connection methods, there are convenient terminal blocks with various functions.

Standard terminal blocks, in which each terminal connection is connected internally, are mainly used for power distribution. 10-circuit, 20-circuit, plug-in type, screw connection, and other types are available and are selected according to the specifications of the equipment.

Many connectors can be used, and products compatible with various connectors such as D-Sub, MIL, and FCN are available. Terminal connections are also available with screw connections, plug-in types, etc.