This section provides overview, applications, and principles of fuses. Also, please take a look at the list of 54 fuse manufacturers and their company rankings.

What Is a Fuse? 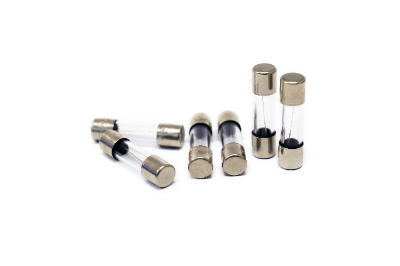 When there is an abnormality in an electric circuit, an overcurrent, which is a large current exceeding the design of the circuit, may flow due to a short circuit or overload.

Overcurrents can not only lead to failure of the equipment itself, but can also cause fires due to abnormal heat generation or ignition.

Fuses is electronic components built in to protect against these hazards from overcurrents, and when connected in series with a circuit, act as conductors that carry current during normal operation.

When an overcurrent occurs, the body of the fuse is designed to melt, preventing the current from flowing to downstream circuits.

Fuses are used as safety devices to prevent circuit damage and the resulting fires.

In the past, fuses were used in the switchboards of many homes, but nowadays, breakers are more widely used than fuses, which need to be replaced once they blow.

Fuses are also still used in automobiles to protect the electrical system and prevent vehicle fires.

Fuses come in a variety of shapes and sizes depending on the application, including the plate fuses used in old houses and the blade fuses used in vehicles.

How to Select Fuses

The rated breaking current is a characteristic of how many amperes of current will cause the fuses to blow and interrupt the circuit. Currents that should be considered when selecting a device include steady-state current, inrush current, and abnormal current.

The steady-state current is the current value that flows when the circuit is stable after the power is actually turned on. The inrush current is calculated from the current and time from power-on to the steady state. The current waveform from power-on to the steady state is measured and the Joule integral is calculated. The calculated maximum Joule integral should not exceed the Joule integral of the blown fuses. The abnormal current should be considered from both the maximum current that can be expected while the circuit is in use and the minimum current at which the circuit should be interrupted. The protection conditions should be examined in detail in conjunction with the fusing time characteristics described below.

The rated voltage is the maximum voltage at which an abnormal current can be safely interrupted. If the voltage in the circuit in which the fuses are incorporated is higher than the rated voltage of the fuses, destruction such as ignition will occur.

Fuses come in a variety of shapes to suit the type of circuit and environment in which they are mounted. There are types that are mounted on the surface of a flat substrate, types that have pins or lead wire terminals that pass through holes in the substrate, tubular glass tube types, types that are fastened to the circuit with bolts and nuts, and flat plate types used in automobiles. If the type or shape you want to use is not among the ready-made fuses, some manufacturers will accept special orders.

The basic principle of fuses is that it is connected in series to a circuit, and when it detects a circuit malfunction such as an overcurrent, it blows itself to interrupt the current.

When an electric current flows through the fuses element, the fusing part of the fuses, Joule heat proportional to the square of the current value, is generated.

If the current is less than the rated current of the fuses, heat dissipation is more dominant than the temperature rise associated with the Joule heat generation, and no fusing occurs.

Thus, fuses designed based on the equilibrium of Joule heat generated by electric current are called power fuses in particular.

On the other hand, fuses that detect a rise in ambient temperature and blow are called thermal fuses, and are often used in appliances that generate heat, such as hair dryers.

Thermal cutoffs are made of low-resistance elements and generate almost no heat due to electric current.

In general, both power fuses and thermal cutoffs are irreversible, and fuses replacement is required to restore them to normal operation.