What Is an EMC Countermeasure? 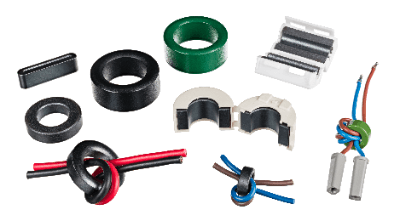 We are surrounded by many electronic devices, each of which handles electromagnetic signals and waves. If EMC countermeasures are not taken properly, they may malfunction, switch on without permission, or interfere with communications.

EMC countermeasure components can be roughly divided into three categories.

If the expected noise components are on the high-frequency side, LPF (low pass filter) is effective to cut them. It functions as a filter by incorporating coils, beads, and resistors in series with the signal input and capacitors in parallel. An AC power line filter that combines a capacitor and a common mode filter is also used.

Noise can appear as a sudden phenomenon. Varistors and Zener diodes are incorporated in parallel to prevent transient changes in voltage, especially due to electrostatic effects as noise. These are elements whose resistance value changes depending on the voltage.

Other Information on EMC Countermeasures

The second is a noise tolerance design for EMS (commonly called immunity), which is the level of noise that an electronic device can withstand without malfunction or abnormal conditions even if it accepts noise. EMC design is to ensure that both of these aspects of the electronic equipment are sufficiently satisfied with the various standards, laws, and regulations for the electrical products in which the equipment is installed.

The usage of surge absorbers, such as varistors and surge arresters, is to be connected to the ground in combination with a grounding capacitor, etc., in an electric circuit to release high-energy noise, including lightning coming from outside, to the ground (earth), thereby protecting electronic equipment from high-voltage It plays a role in protecting electronic equipment from high voltage and destruction by allowing lightning and other high-energy noise from outside to escape to ground (earth).