What Is a Gas Chromatograph? 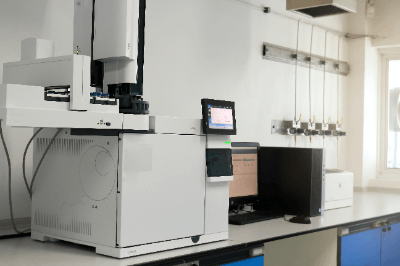 Its principle is to vaporize a sample and then separate each component to determine the type and content of compounds. The greatest advantage of this method is that it can analyze volatile components even at very low concentrations. Currently, gas chromatographs are used in a wide range of fields, including pharmaceutical, food, and chemical industries, contributing to the foundation and development of science and technology.

Gas chromatographs are used for separation and analysis of compounds in the fields of medicine, food, and chemistry. For example, it can be used to measure the concentration of hazardous substances and to analyze the components of gases generated in equipment. Note, however, that not all compounds can be analyzed. Due to its principle, gas chromatography generally cannot analyze non-volatile compounds with a boiling point of 400°C or higher, or unstable compounds that decompose at high temperatures. Inorganic metals, ions, and highly adsorbable compounds are also difficult to analyze for the same reason, and must be confirmed prior to analysis.

The principle of gas chromatography is very simple and consists of the following three steps:

First, the liquid sample is thermally vaporized. The vaporized components are transported to the column by a carrier gas. The vaporized components are adsorbed and distributed to the stationary phase (liquid phase) in the column, separated by component, and passed through the column. Since the speed at which compounds move through the column differs depending on the compound, the components with the fastest movement speed are first separated out of the column. Since each separated component is recorded as a peak by the detector, the type and concentration of the sample can be determined by comparing the retention time and peak area with those of the standard.

The main feature of this analytical method is that it can analyze volatile components that cannot be separated, identified, or quantitated by high-performance liquid chromatography.

About the Stationary Phase Used in Gas Chromatography

The selection of the stationary phase to be used in the column of gas chromatography is very important. If a column with an appropriate stationary phase is not used according to the characteristics of the components, separation and analysis will be difficult.

Columns are broadly classified into two types based on the polarity of the stationary phase: nonpolar columns and highly polar columns.

Due to their low volatility, highly polar organic low-molecular-weight compounds are generally difficult to separate and analyze using gas chromatography. However, depending on the structure of the target compound, it may be possible to derivatize it into a volatile compound using chemical methods, in which case separation using gas chromatography becomes possible. Therefore, such derivatization techniques are widely used for separating and analyzing compounds that are difficult to separate by high-performance liquid chromatography. One such example is the TMS derivatization of sugars and oligosaccharides, compounds with many hydroxyl groups, followed by GC analysis.

A detector in Gas Chromatography

Thermal Conductivity Detector (TCD) defects components by reading the temperature change of a filament based on the difference in thermal conductivity between the carrier gas and the target component. Both inorganic and organic components can be detected nondestructively.

Thermal Conductivity Detector (TCD) detects each component by amplifying the light of a specific wavelength generated from the element by combustion using a photomultiplier tube and converting the intensity of the light into an electrical signal. Sulfur compounds, phosphorous compounds, and organotin compounds can be detected.

Sulfur components are detected by measuring the light produced when chemical species (mainly SO) converted from sulfur compounds are excited by ozone and then return to their ground state using a photomultiplier tube.

This detector is suitable for the measurement of organic nitrogen compounds. When a compound containing phosphorus or nitrogen enters the rubidium salt in the hydrogen flame, it ionizes to form CN- and PO- ions, which are detected.

This detector is used for the selective detection of compounds with high neoelectronicity, such as organohalogen compounds, organometallic compounds, and nitro compounds. Components are detected by reading changes in voltage values to keep the ion current collected in the collector constant.