What Is an AFM? 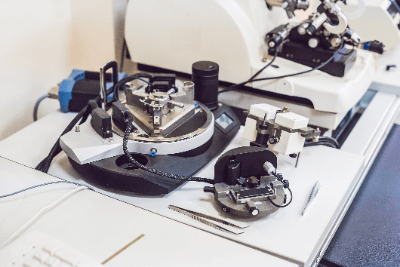 AFM's (Atomic Force Microscopes) are a microscope that visualizes the fine surface structure of a sample by detecting and scanning the force acting between a probe called a cantilever and atoms on the sample surface.

Scanning tunneling microscopes have a longer history in microscopy for visualizing surface microstructures, but these microscopes are limited to the measurement of conductive samples because they generate a tunneling current between the cantilever and the sample. The AFM is characterized by its ability to measure a wide range of objects, from conductive samples to insulators and biological samples.

AFM is mainly used in the industrial field for inspection purposes because it can reveal surface irregularities at the nanoscale (1 nm = 10-9 m) to angstrom (0.1 nm) level.

For example, it is used to measure the uniformity and roughness of the surface treatment of semiconductor substrates and to inspect the corrosion and degradation of plating on electrodes made of metals such as gold and copper. In research applications, it is also used to minimally invasively observe reactions and structural changes in proteins and other biomolecules.

Another method is to directly measure the force applied to the cantilever by measuring its flexure. In this case, the AFM is used to measure the localization of membrane proteins and the mechanical properties of cells, rather than to measure surface topography.

What Can Be Learned by Using AFM's

Forces that can be detected using AFM's include forces of attraction, repulsion, adhesion between the terminal tip and the surface of the material, and binding forces. The AFM is also used in the field of catalysis. Examples of applications are listed below.

They are used in the mic observation of single crystal zeolites and layered clay minerals. Mica cleavage surfaces, which are atomically smooth, can be used to observe palladium particles as small as a few nm on palladium catalysts deposited on the mica cleavage surfaces. In addition to not requiring any special  pretreatment of materials for measurement, the AFM is characterized by its ability to perform measurements in a wide range of environments, including in air and liquids. This feature is used as a means of measuring adsorption phenomena and chemical reaction processes in localized surface areas. An example of such a measurement is the adsorption process of a soft organic compound. By modifying the tip, forces other than atomic forces can be selectively measured. As an example, the tip can be chemically modified with an organic monolayer to function as a chemical sensor.

Force Curve of The AFM

Difference Between The AFM and STM