What Is an Industrial Microscope? 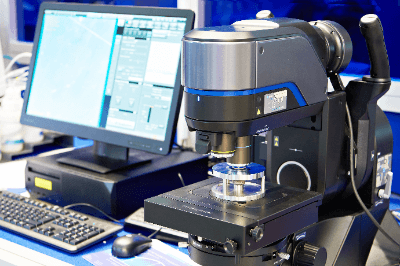 There are also microscopes that combine several functions such as a camera and 3D measurement in addition to the microscope function.

Therefore, it is used for development, analysis, and inspection during the manufacture of products such as semiconductors, magnetic heads, liquid crystals, and films. It is also used for post-processing analysis such as casting, heat treatment, and metallurgy. Detailed observation is also possible, such as observation of substrate solder joint surfaces and the depth of weld penetration.

In addition to industrial applications, microscopes are also needed for research in metallography and mineralogy.

Metallurgical microscopes often use reflective illumination, which shines light on the surface of the object to be measured, and observation is the purpose of use in many situations. In contrast, a measuring microscope also has transmitted illumination. In addition, the stage on which the object to be measured is placed is equipped with a digital scale and counter as standard, and has mechanisms and functions for measurement. In summary, industrial microscopes are microscopes used in industry in general, and since they are mainly used for observation, they are rarely required to guarantee magnification on the stage travel or magnified observation image.

Thus, selecting a microscope according to its application not only ensures the proper use of the cost of installed equipment, but also eliminates the need to have an unnecessary number of different devices.

The microscopes that are generally associated with the image of a microscope are upright microscopes. Many microscopes allow either transmission or reflection depending on the illumination method, and the optical system can be easily designed. In contrast, inverted microscopes are often used in fields such as medicine and metallurgy. This is because in the medical field, it is suitable for observing a petri dish from the bottom, and in the metallurgical field, it is easy to level the observation surface in relation to the optical axis by placing the surface face down. Both have the characteristic that the object is required to be observed from the bottom.

As an example, an inverted microscope can be used not only in specific fields but also in a wide range of fields by simply devising the way to approach the object to be observed.