This section provides overview, applications, and principles of ferrite magnets. Also, please take a look at the list of 12 ferrite magnet manufacturers and their company rankings.

What Is a Ferrite Magnet? 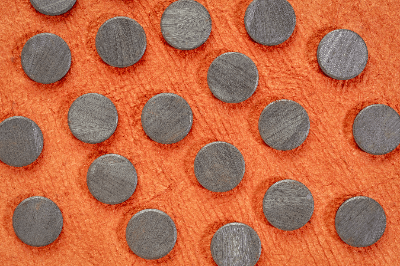 The composite metal M is dominated by divalent cations, and Fe3O4, where M = Fe, is black and is a well-known raw material called magnetite. Other compounds exist where the compound metal M is 1, 3, or even tetravalent cations, called ferrite.

The manufacturing process involves pressing powdered ferrite and baking it at high temperatures. It is also a type of ceramic. It can be synthesized from iron oxide Fe2O4 and is therefore inexpensive.

The characteristics of ferrite magnets are that they can be easily formed into any shape and are easy to process, and that they are chemically stable and resistant to corrosion by rust and chemicals.

Applications of ferrite magnets can be divided into two types: hard ferrite and soft ferrite.

Soft ferrite is a ferrite magnet that becomes a magnet when in contact with a magnetic field and ceases to be a magnet when removed from the field. It is often used as a magnetic core and is suitable for transformers and coils.

Hard ferrite is a ferromagnetic material and a permanent magnet. Hard ferrites can be further classified into isotropic and anisotropic magnets according to the orientation of the magnetic poles of their molecules.

For example, a spinel-type crystal structure has a high magnetic permeability (the degree to which a material is magnetized) over a wide range of frequencies. The garnet type has the property that single crystals are not easily broken in the microwave frequency range.

There is a limitation that they must have a long shape due to the need for a long distance between the poles. Also, the supply of the raw material, cobalt, is unstable and expensive, so ferrite magnets are less expensive.

Samarium cobalt magnets are rare earth magnets composed of samarium (Sm) and cobalt (Co). They are divided into SmCo5 (1-5 series) and Sm2Co17 (2-17 series) according to their composition ratio, with the 1-5 series, which contains less samarium, being widely used today.

Samarium cobalt magnets are characterized by a high Curie temperature of approximately 800°C at maximum. Because of its excellent corrosion resistance, it can be used as is without surface treatment, and its shape is highly selectable. Magnetic properties are higher than those of ferrite magnets and second only to those of neodymium magnets.

Because they can be used in environments up to about 350°C, they are used in space-saving, high-temperature environments where higher magnetic force than ferrite magnets is required. On the other hand, it has the disadvantage of low strength, which makes it prone to cracking and chipping. The raw materials samarium and cobalt are both rare, making it very expensive compared to ferrite magnets.

A neodymium magnet is a magnet composed mainly of neodymium (Nd), iron (Fe), and boron (B). Neodymium magnets are characterized by their easy oxidation and high thermal dependence.

Because they oxidize easily, their surfaces are nickel-plated before use. They are usually used at temperatures below 80°C. Because of its relatively high strength, it is also resistant to cracking and chipping.