This section provides overview, applications, and principles of petri dishes. Also, please take a look at the list of 13 petri dish manufacturers and their company rankings.

What Is a Glass Petri Dish? 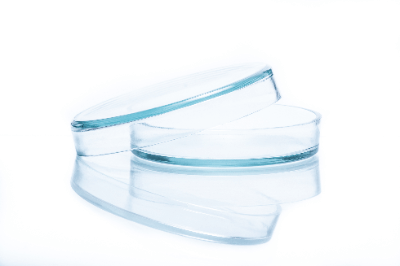 Petri dishes are used to hold test samples or to culture microorganisms or tissues. In particular, glass petri dishes have excellent heat resistance and can be reused by autoclaving or other sterilization processes after culturing bacteria and microorganisms.

A petri dish is a set of two cylindrical shallow dishes with slightly different diameters. The lid side is designed to be large and shallow, while the bottom side is small and deep. However, they are not hermetically sealed and unsuitable for culturing anaerobic bacteria and microorganisms.

Glass petri dishes are available in a variety of sizes. The most common is about 10 cm in diameter and 1 or 2 cm in height, but there is also a taller version called a waist-high petri dish on the market.

By preparing a culture medium in a glass petri dish and incubating it under an appropriate environment after inoculation, it is possible to observe the number of bacteria at the time of inoculation, and the degree of growth of the bacteria from the number of colonies in the petri dish. Glass petri dishes are highly transparent, making it easy to see what has been placed inside, and thus cultured tissues and microorganisms can be observed directly under a microscope. The excellent heat resistance of glass petri dishes also makes them suitable for sterilization.

Other Information on Glass Petri Dish

Even though glass petri dishes are more heat resistant than those made of other materials, it is strictly prohibited to heat them over an open flame using a burner or the like. Rapid heating may damage the glass petri dish. When applying heat to a glass petri dish for experiments, use an evaporating dish.

Glass petri dishes are generally sterilized by dry heat sterilization. Dry heat sterilization is a method of sterilizing microorganisms by heating them in dry air. It is used to sterilize glass and metal instruments that can be subjected to high-temperature treatment without problems, or that should not be exposed to steam.

Care must be taken to ensure that the metal parts of the dry heat sterilizer near the heater are not too hot, as they may be hotter than the set temperature. Turn on the sterilizer and measure the heating time after the inside of the chamber reaches the set temperature. When dry-heat sterilization is complete, stop heating and wait until the chamber cools down before removing the glass petri dish.