What Is a Programmable Controller? 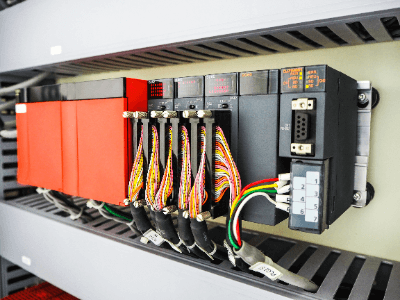 A programmable logic controller is a control device with a built-in microprocessor. Normally, inputs from sensors and switches in equipment are output to motors, displays, and other devices via mechanical relays, timers, and other control mechanisms.

Since there are fewer mechanical contacts, the device can be controlled without the need for contact wear and defects between electronic components, cumbersome input/output devices, and wiring between mechanical relays for control. In addition, electrical wiring can be simplified, leading to downsizing and mass production of devices.

Programmable controllers are used in a wide range of fields, including factory automation systems, automobiles, home appliances, and industrial equipment. They are mainly used in industrial and commercial equipment.

In commercial applications, there are examples used in large washers and dryers with sequence control, because they are cheaper and more robust than using a PC. Another factor is that they often do not require a cooling system because there is no graphics board and the microprocessor generates little heat.

Programmable controllers can be either one-package types, in which all the electronic components necessary for operation are built in, or building types, in which you select each functional component yourself.

It is important to select the memory, processor, and output/input terminal specifications according to the electronic device to be used.

If you want to change the operation of electronic equipment devices controlled by the programmable controllers, you do not need to make any changes to the wiring or other components. You only need to change the program code, which saves time and labor costs.

In the ladder method, programs are written on a PC by connecting symbols such as relays, switches, and timers between two parallel lines like a ladder. The feature of this method is that it is easy to learn because the program code can be created by visual operations. Figure 3 shows an example of a ladder program for lamp control that was previously built using mechanical relays and timers.

Other Information on Programmable Controllers

If you work in production, you may have heard the term "sequencer". There is no difference between programmable controllers and a sequencer.

Sequencer simply refers to the trade-marked name of Mitsubishi Electric's programmable controllers. It was marketed under the name "sequencer" as a mechanical device that enabled sequence control.

Since it was completely hooked as a name to indicate the function, a sequencer is also used today as an alias for programmable controllers.

2. Connecting Programmable Controllers to a PC

Serial signals have long been used for connection to a PC. In the past, many PCs had a serial port permanently installed, but these days serial ports are rare.

If an Ethernet network is being built, it is now possible to edit multiple controllers from the Ethernet port.