This section provides overview, applications, and principles of media converters. Also, please take a look at the list of 22 media converter manufacturers and their company rankings.

What Is a Media Converter? 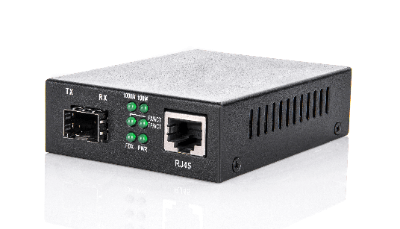 A media converter is a device for converting different media signals into each other.

Optical fiber communications, on the other hand, are less susceptible to these effects and are suitable for transmission over long distances. However, since the signal medium is different between metal cables, which transmit voltage fluctuations, and optical fiber, which transmits flickering light, it is necessary to convert the signals into each other's signals in order to connect them.

By linking the two signals through a media converter, a network circuit can be constructed that takes advantage of the strengths of each cable. This is especially useful for communication between terminals that cannot be physically reached with metal cables alone.

Media converters are installed at both ends of optical fibers that relay between metal cables.

The first (transmitting) media converter converts signals from the metal cable to the optical fiber, i.e., from electrical signals to optical signals.

Media converters differ in the conversion method depending on whether the communication speed on the electrical signal side is the same as that on the optical signal side.

If the communication speeds are the same, conversion is performed in real time with almost no delay.