This section provides overview, applications, and principles of laser diodes. Also, please take a look at the list of 17 laser diode manufacturers and their company rankings.

What Is a Laser Diode? 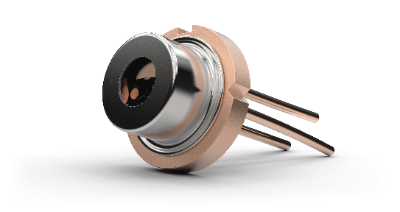 A laser diode is a laser that uses recombination emission from a semiconductor.

The color of the laser is determined by the elements that make up the semiconductor. Some lasers operate at room temperature, while others require cooling, depending on the resonator structure and output power.

The difference between laser diode and LEDs is that laser diode meet the requirements for laser oscillation. Variations in wavelength and amplitude of the light are much smaller in laser diode as well.

Laser diodes are widely used in consumer information equipment because of their small size, low power consumption, and low cost.

They are used in optical pickups for optical drives such as CDs, DVDs, and BDs, copiers, laser printers, and optical fiber-based communication devices. High-power laser beams are also used in laser markers and laser processing machines.

The diffusion-resistant and long-distance reach of laser light is also used in surveying instruments and laser pointers for pointing at objects.

In laser diodes, light is emitted by the recombination of holes (holes through which electrons have been released) and electrons when a voltage is applied.

The emitted photon triggers another electron to recombine with the hole one after another, emitting photons, so that the generated light has the same phase and wavelength. Since the wavelength of the light is always constant, it is used in bar code readers, laser pointers, fiber-optic communications, and other applications requiring a constant amount of light.

Other Information on Laser Diodes

The L/I curve is used to understand laser diodes specifications. This curve allows us to keep track of the drive current supplied in relation to the light intensity output.

By reading this curve chart, one can see that optical output depends greatly on temperature, and that as temperature increases, laser characteristics also decrease. This makes it possible to visualize and estimate the efficiency of a laser diodes by incorporating the L/I curve.

Light-emitting diodes have disparate phases, so light rays are diffused radially. In contrast, laser diodes are in phase with each other, resulting in a linear beam of light.

The average life of a laser diodes varies depending on the operating environment (operating temperature, static electricity, power surges) and is generally between 10,000 and 50,000 hours.

The following section discusses operating temperature among the environmental factors that affect the average life of laser diodes.

Therefore, the use of heat sinks (radiating plates) is recommended to reduce the effects of operating temperature and to increase luminous output.