This section provides overview, applications, and principles of air showers. Also, please take a look at the list of 4 air shower manufacturers and their company rankings.

What Is an Air Shower? 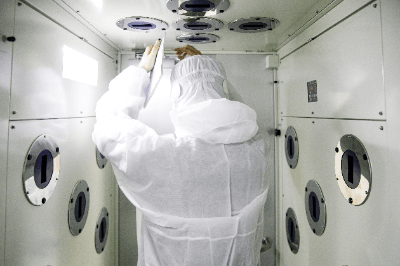 Air showers are box-shaped devices installed at the entrances to clean rooms, etc. They use dust-free air that has passed through a highly purified, multi-layered filter called HEPA to remove dust from people's clothes.

Air showers are mainly used in semiconductor and precision equipment manufacturing facilities. In most cases, they are installed at the entrance to prevent dust from entering the clean room.

To maintain the cleanliness of the clean room, it is important to remove all dust in the air shower. Because it can remove dust from clothes in a few tens of seconds, it is sometimes installed at the entrance of apartments for pollen-allergic patients.

Air showers have double doors with interlocks that prevent both doors from opening at the same time. When a person enters the air shower from the outside, the air is injected through the jets for a set number of seconds. The air is highly purified through a HEPA filter.

The interlocks on the double doors allow only a small amount of dust to enter when exiting, which also contributes to extending the life of the HEPA filter.

How to Select an Air Shower

Select an air shower that meets the cleanliness requirements of the clean room, as higher dust removal performance is more expensive. The cleanliness of a clean room is classified by ISO based on the size and quantity of particles inside.

Each air shower is selected by checking its guaranteed class. It is also possible to reduce costs by selecting a simple type of air shower that does not have a room. If the number of people coming in and out of the room is large or frequent, a large air shower that can accommodate several people at the same time may be selected.

Other Information on Air Showers

1. How to Use Air Showers

Air showers are equipment that removes dust to prevent dust from being brought into the clean room. However, if it is used improperly, it will not achieve the expected dust removal effect. First, decide on a standing position with a predetermined capacity, and mark the "stop" marker. Depending on the standing position, the air velocity hitting the body will decrease, and the dust removal effect will also be reduced.

Next, adjust the air outlet slightly downward toward the standing position. This has the effect of reducing the air blowing up and reducing re-contamination caused by the dust flying up. During the air shower, rotate 2-3 times with your arms outstretched so that the air blows over your entire body. After rotation, the unit waits in place until the set time.

These results indicate that it is appropriate to select a double-sided blowout type for clean rooms that require a high level of cleanliness. In places with high cleanliness requirements, it is more economical to use a single-sided blowing type to remove large dust and debris.