This section provides overview, applications, and principles of stud bolts. Also, please take a look at the list of 30 stud bolt manufacturers and their company rankings.

What Is a Stud Bolt? 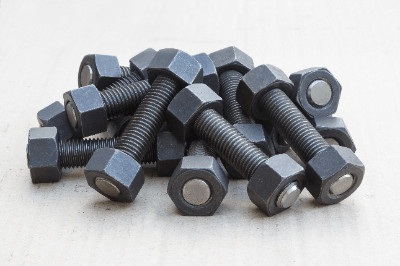 A stud bolt is a bolt that has no head like a hexagonal bolt but only a shaft with threads (male threads) on both ends. The terms "planted bolt" and "inch-cut bolt" are also commonly used as synonyms.

The threaded part at one end is screwed (implanted) into the female thread of a machine or part, and the object to be fixed is attached and fastened with a nut.

The features of stud bolts are shown below.

Stud bolts are used in various situations, such as assembling machine bodies and parts and fixing parts together.

A common example of assembly and fastening of machine bodies and parts is the attachment of automobile hubs and tire wheels. Stud bolts are also used for fastening flanges as an example of fixing parts together. Stud bolts are characterized by their superior flexible strength, which allows them to be tightened with high torque to provide a strong fastening force.

A welding stud (or weld bolt) is a bolt used in a similar application to the stud bolt. Weld studs are implanted in machines and components by bolt welding rather than screwing into female threads. Weld studs may be subject to distortion during welding. This should be considered in the product design, such as increasing the bolt hole diameter in the workpiece to allow for fastening even if the bolt is bent and attached due to some weld distortion.

Stud bolt threads are generally manufactured by a process known as thread rolling. In the rolling thread process, the stud bolt material is clamped with a thread die under pressure, and the material's outer surface is formed into a thread shape. Compared to the cutting process, it is superior in productivity and suitable for mass production.

When used in locations where rainwater intrudes or where exposed to the elements outdoors for long periods of time, austenitic stainless steel with high corrosion resistance should be used.

Since austenitic stainless steel has more thermal elongation than alloy steel, care must be taken against loosening and thermal stress due to thermal expansion. In addition, stainless steel threads may gall if stainless steel stud bolts and nuts are used under conditions where heat is applied. Carbon steel or alloy steel should be used for nuts to prevent galling.

What Is a Stud Bolt Remover?

A stud bolt remover is a special tool used to install and remove stud bolts. A stud bolt has one end implanted in a machine or part, and the threads may be crushed. The bolt itself may break, or the bolt may become unusable due to deterioration and wear over time. In this case, the stud bolt must be replaced. To replace a stud bolt, the stud bolt remover can be used to loosen or tighten the bolt securely. In many cases, the implanted threads are seized to the machine, female threads, or have become adhered to after a long period of time. In such cases, it is necessary to heat the area around the implanted part with a burner to make it easier to loosen or to use a penetrating thread-loosening material to pierce the area.

In addition to using a stud bolt remover, another common method of removing a stud bolt is to use a double nut, which consists of two nuts. By tightening and securing the two nuts together, the double nut is like a bolt with a head, and by turning the nut, the bolt can be turned as well.