This section provides overview, applications, and principles of u-bolts. Also, please take a look at the list of 43 u-bolt manufacturers and their company rankings.

What Is a U-Bolt? 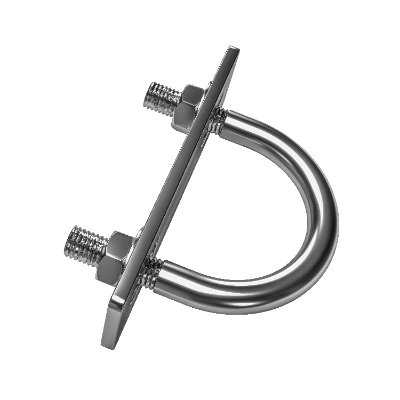 A U-bolt is a bolt used to secure a pipe to a trestle, bracket, or stay during a piping installation. The bolt is U-shaped and threaded at both ends, making it possible to easily and securely fasten a pipe with a single U-bolt.

JIS F3022, U-bolts for mounting steel pipes for ships, were previously used as the standard of U-bolts, but was discontinued on August 10, 2006 due to its low frequency of use and limited track record. However, some products are still manufactured according to the old standard. Currently, specifications and dimensions are stipulated by each manufacturer.

U-bolts are mainly used for fixing pipes. U-bolts are sized according to a pipe's outside diameter, and the bolts are rounded and bent to follow accordingly, making them easy to fit on curved surfaces and provide good compatibility.

In addition to piping, U-bolts are also used for fastening leaf springs and axles in the rear suspension of heavy vehicles such as trucks and buses.

When the object to be fastened is rectangular, such as a square pipe or channelling, a square-shaped U-bolt is used instead of a rounded U-bolt.

U-bolts, like normal bolts, use nuts to secure the object, but since the U-shaped bolt clamps the object, it is important to correctly measure the diameter of the object and select a bolt that is compatible with it.

If the member to which the pipe is to be fastened is thick, a foot-long U-bolt with a longer overall length should be used.
Since the JIS standard for U-bolts has been abolished, it is necessary to note that there may be variations with varying detailed dimensions among manufacturers.