This section provides overview, applications, and principles of hydraulic valves. Also, please take a look at the list of 60 hydraulic valve manufacturers and their company rankings.

What Is a Hydraulic Valve? 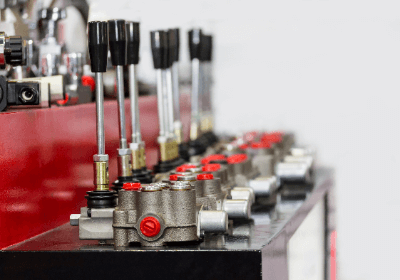 Hydraulic valves control the direction, pressure, and flow of hydraulic oil and are essential for hydraulic excavators and other construction machinery.

The solenoid type can be controlled by an external controller, expanding the range of control and adding convenient functions to the product for the operator.

A directional control valve is a control valve in the case of a hydraulic excavator. Upon receiving an external signal, the location of the spool changes to determine the direction (port) in which the hydraulic oil flows. For example, when it receives a signal to extend the cylinder, the spool moves, and oil flows from the port to the extending side of the cylinder to extend it.

A flow control valve is a throttle valve or stops valve of a control valve in a hydraulic excavator. Like a water tap, it controls the speed of the actuator by means of an aperture. By changing the opening degree of the orifice, the passing area of the hydraulic oil is changed, thereby controlling the flow rate.

There are various types of hydraulic valve symbols. In the case of a directional valve, the direction of oil flow after switching is indicated by an arrow because the oil path is switched by the movement of the spool. If there are multiple oil path switching patterns depending on the direction in which the spool moves, each circuit is shown in separate rooms.

In the case of a manually operated hydraulic valve, a lever is shown next to the circuit symbol, and a solenoid is shown when the spool is moved by electrical control. Furthermore, if the movement of the spool is finely controlled by a solenoid proportional valve, an arrow is indicated on the solenoid symbol.

Hydraulic valves can be roughly classified into three types: directional control valves, pressure control valves, and flow control valves. If we further subdivide the valves from this classification, we can find solenoid proportional valves, check valves, relief valves, throttle valves, and counterbalance valves., which have a wide range of roles.