What Is a SCARA Robot? 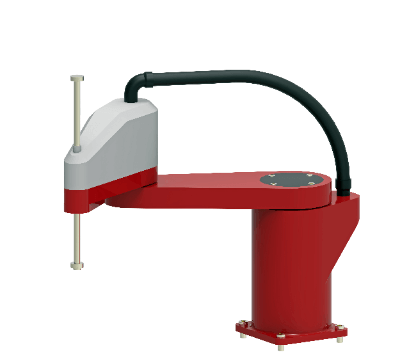 SCARA robot is a horizontally articulated industrial robot with three rotational axes for horizontal motion and one axis for vertical motion.

The acronym SCARA stands for "Selective Compliance Assembly Robot Arm," and the robots are commonly referred to as SCARA robots. SCARA robots have the following features.

Taking advantage of these features, SCARA robot is used for assembly work applications such as inserting and placing parts and tightening screws, contributing to automation of production sites.

SCARA robots are often used in production lines for food products and electronic substrates. In addition to these applications, there are various other uses such as pick & place operations for parts, etc., press fitting operations, dispensing operations, assembly operations, etc.

2. Use in Electronic Board Production Lines

The SCARA robots arm tip can be equipped with the following tools depending on the work to be performed.

Other Information on SCARA Robots

Some SCARA robots are designed for high-speed operation. The SCARA robots contributes to the productivity improvement of the entire production line by operating at high speed.

If SCARA robots can finish their work quickly, workpieces can be passed on to subsequent processes more quickly. As a result, the time to produce a single product is reduced. This is the reason why the productivity of the entire line improves when SCARA robots operate at higher speeds.

The following measures are effective in realizing SCARA robots capability of high-speed operation.

By transmitting information obtained from the camera to the SCARA robots, the performance of the robot itself can be improved. Consider the case where a SCARA robots are tightening screws to a workpiece. Each workpiece has individual intersections, and strictly speaking, each has a slightly different size.

Here, a camera is used to photograph the screw holes and calculate the amount of displacement from the reference position. The amount of misalignment is then sent to the SCARA robots, which corrects the position by offsetting it to the original teaching point.

This enables the SCARA robots to perform screw tightening work no matter where the screw hole is located within the camera's imaging range. This mechanism is called "image position compensation" and is widely used in factory automation.