This section provides overview, applications, and principles of thermal cameras. Also, please take a look at the list of 17 thermal camera manufacturers and their company rankings.

What Is a Thermal Camera? 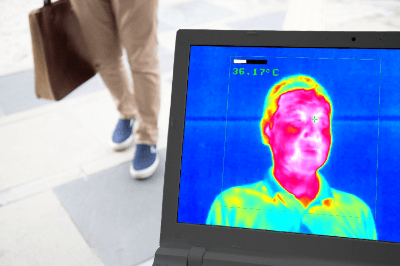 A thermal camera is a camera that detects the surface temperature of an object and displays it as an image.

Thermal cameras can also be used in cases where it is difficult to touch the object to be measured since they can detect temperatures without touching the object.

Thermal cameras are used in a variety of situations.

Machine monitoring in factories and electrical facilities
Thermal cameras are widely used to measure human body temperatures because they are non-contact and can quickly and easily determine a person's body temperature. Also, since the measurement is non-contact, temperature changes during the operation of machinery in factories and electrical facilities can be measured without danger to the person being measured and without affecting the object being measured by the temperature measurement.

A thermal camera receives the infrared light emitted from an object with an internal detector, scans it, and then processes the A/D-converted and temperature-converted data into an image that is displayed as a thermographic image in red, blue or other colors that the human eye can easily see.

Thermal cameras can be classified into the handy type and stationary type, on-press type, and cloud type based on the data storage method.

Handheld thermal cameras are easy to carry and are used in stores, reception areas, commercial facilities, etc., to reliably measure the body temperature of a small number of people.

Thermal cameras can be classified into the on-premise and cloud computing types, depending on where the measurement data is stored. On-premise-type systems use their servers. This has the advantages of "being able to use existing company facilities" and "having a high degree of freedom in linking with the company's systems." On the other hand, the disadvantage is that operation and maintenance costs are high.

On the other hand, cloud computing is a system that uses cloud servers. Cloud computing has the advantages of "easy data sharing among multiple locations" and "low operation and maintenance costs." On the other hand, there may be security issues depending on the environment, but there are services that provide a complete set of thermal cameras, applications, and a secure connection environment.

Other Information About Thermal Cameras

Therefore, it is important to take into account the differences in the environment before and after the measurement in order to measure body temperature with high accuracy using a thermal camera. One method for highly accurate measurement is to use a black body.

2. Thermal Cameras in the Fight Against Coronavirus Infection

Thermal cameras are already being used in a variety of locations due to the following advantages:

When considering the use of a thermal camera, there are different factors to consider depending on where the camera will be used and what is to be inspected. For example, in areas where a large number of people come and go, AI-equipped thermal cameras are effective.

If abnormal temperatures are detected, an alert will be issued. This system is used in airports, hospitals, large commercial facilities, etc., where large numbers of people come and go, and it is difficult to inspect each person on time.