This section provides overview, applications, and principles of rf amplifiers. Also, please take a look at the list of 11 rf amplifier manufacturers and their company rankings.

What Is a RF Amplifier? 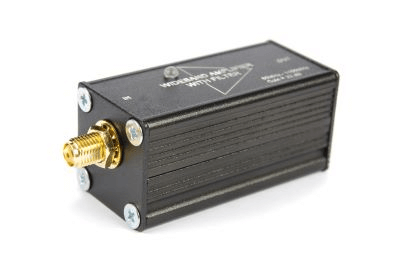 The "RF" in RF amplifiers stands for radio frequency, which refers to the high frequencies used in mobile wireless communications such as radios and smartphones, and thus RF amplifier refers to a high-frequency power amplifier.

In general amplifiers, the input voltage or current is amplified and output, but in the case of RF amplifiers, instead of this function, a DC bias is used to amplify high-frequency power signals by the amplifier's gain relative to the input power. Therefore, the power for DC bias can be used for amplifying high-frequency power with relatively high efficiency without loss of power.

It should also be noted that the electrical characteristics required for RF amplifiers, i.e., the type of amplifier, differ depending on whether they are used in receiving or transmitting circuits. RF amplifiers are characterized by their ability to amplify and convert DC power into high-frequency power without loss of DC power, and are considered to be highly efficient RF amplifiers. The types differ depending on whether they are used for receiving or transmitting circuits.

High-frequency circuits for communication are divided into receiving and transmitting blocks, and the type of RF amplifiers generally differs depending on whether they are used for receiving or transmitting.

RF amplifiers used for transmission are called power amplifiers (PA), which require high amplification. Because of the large amount of power handled, it is important to have low power consumption, i.e., high amplifier efficiency, in order to maintain reliability by suppressing heat generation and battery power consumption. Also, depending on the application, the amplifier itself must have sufficient linearity to prevent signal distortion.

On the other hand, an RF amplifier used for reception is called a low-noise amplifier (LNA). It is characterized by low noise (NF) generated by the amplifier itself to prevent the signal from being buried in the noise and to maintain communication quality by increasing the reception sensitivity during communication.

Depending on the RF frequency, the frequency response, called the cutoff frequency (fT), may be insufficient to extract sufficient amplification. Therefore, the stand-alone frequency response determined from the semiconductor device structure is a very important factor in constructing an RF amplifier.

The amplifier characteristics are determined by applying the desired DC (direct current) bias to the amplifier device and optimally setting the input and output load lines of the amplifier. In addition to the fundamental frequency impedance setting, the harmonic impedance setting is also important, and together with the bias, various operating classes (Class A, Class C, Class F, etc.) can be set.

Other Information on RF Amplifiers

RF amplifier characteristics include 1 dB compression, gain, and noise figure. In the gain and power curves, 1dB compression is used as a measure of the maximum amount of power output with 1dB of gain suppressed due to amplifier saturation operation.

Since a large output power is required on the transmit side, it is customary to select an amplifier with a large 1 dB compression region and use it up to the upper limit. An RF amplifier can express its frequency response by its amplification, which is the ratio of input to output power, and its performance is judged by its being within a fixed range of frequency The higher the gain, the more desirable it is.

Although higher gain is desirable, care must be taken as it is a trade-off between power consumption and noise. The noise figure expresses the degree to which the signal-to-noise ratio worsens. When selecting an RF amplifier for the receiving side, choose a small noise figure.