This section provides overview, applications, and principles of phototransistors. Also, please take a look at the list of 16 phototransistor manufacturers and their company rankings.

What is a Phototransistor? 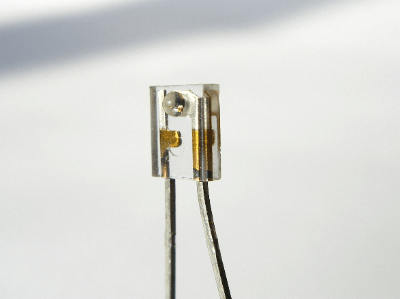 A phototransistor is a semiconductor device for detecting light. Its structure is a combination of a photodiode and a transistor. Since they are available in various shapes depending on the package, selecting the appropriate one for the application is necessary.

CDS is a photoresistor. It is also called a CDS cell or photoconductive cell.

The advantages of CDS are that its minute sensitivity characteristics are close to those of human vision, its structure is simple, its sensitivity is high, and its price is low.

CDS is used as a detector in various instruments. For example, they are used in illuminance meters, exposure meters for cameras, and brightness detectors for automatic flashing.

However, cadmium sulfide, the main material used as an element in CDS, is an environmentally harmful substance. For this reason, the use of CDS has been gradually decreasing in recent years.

On the other hand, phototransistors provide an output current proportional to illumination. Another advantage of phototransistors is their high sensitivity due to their structure that combines a photodiode and a transistor.

Phototransistors are widely used as light-receiving sensors. In particular, since they have a peak sensitivity of around 800 nm, they are generally used to receive infrared light.

The NPN structure of the phototransistor specifically amplifies the output of the photodiode with a transistor. When light equivalent to the energy gap of the semiconductor enters the transistor, electrons in the valence band are excited to the conduction band.

Transistors used in phototransistors are characterized by the fact that they do not have a base electrode. However, the photocurrent generated by light reception becomes the base current, and this base current is amplified at the collector.

The emitter current is then increased, and the current is converged to the collector, just as in a normal transistor. In other words, the base current is controlled by the intensity of the light.

This means that changes in the base current are amplified, and the collector current can be controlled. However, it should also be noted that the current is constantly leaking at the collector-base junction, and this leakage current is also amplified.

In addition, the photocurrent between the collector and base is slow due to carrier diffusion. In addition, note the characteristic that the response speed is slower than that of photodiodes and PIN diodes due to the presence of collector capacitance.