What Is a Trimmer Potentiometer? 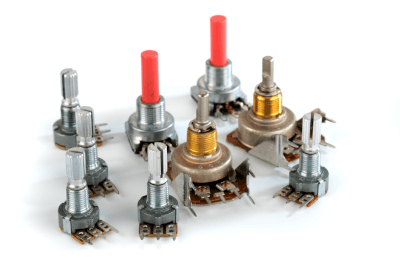 A trimmer potentiometer is a variable resistor whose resistance value can be changed.

They are also called trimmer resistors or trim potentiometers because of their role in adjusting (trimming) the resistance value of a circuit in an electronic device. They adjust for variations due to individual differences in other electronic components.

The resistance of a trimmer potentiometer is adjusted by turning a knob with a driver. There are two types: top-turned and side-turned, and single-turn and multi-turn knobs.

Trimmer potentiometers are used in a variety of products, including communications equipment, measuring instruments, medical equipment, audiovisual equipment, office equipment, and general electronic equipment. They are applied in situations such as post-production timing adjustment, temperature adjustment, and display brightness adjustment.

Typically, once set, they operate as fixed resistors without being seen by the end user, but they may need to be readjusted during maintenance.

Trimmer potentiometers are often used in hobbyist electronics work, as they are useful for fine-tuning circuit boards.

The principle of the trimmer potentiometer is simple. When voltage is applied to both terminals (terminals 1 and 3) of a resistive element, the physical position of the contacts (slider or wiper) that move on the resistive element changes the resistance between terminals 2 and 1 (or 3), which is connected to the slider.

When used for voltage adjustment, a trimmer potentiometer is used as a 3-terminal element: voltage is applied between terminals 1 and 3, and the voltage divided by the voltage is taken from terminal 2.

When used for current regulation, a trimmer potentiometer is used as a 2-terminal element, and voltage is applied between terminals 1 and 2 to regulate the current. However, it is safe to leave the unused No. 3 terminal open and connect it to the No. 2 terminal.